Jump to content
(Redirected from Escape from Tarkov guide) 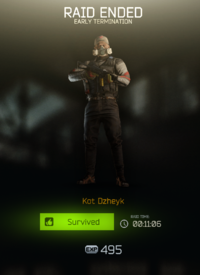 First raid EVER and I survived

I bought Escape from Tarkov (EFT) preorder / beta access on january 28. 2022 because I needed something to waste my sparetime on... time will tell if I get hooked.

This page is intended as my own personal reference card to stuff I probably will forget if I do not write it down somewhere :-D

... The Scav-name of my first raid Kot Dzheyk translates to Jake the Cat

My CPU and Graphics card are watercooled.

I could bebefit from a new motherboard, CPU and RAM but i get +60 FPS consistently with this rig, so i am inhaling the copium for yet some time to squeeze maximum lifespan out of my +5 year old CPU/MoBo/RAM LUL

Credits for this Checklist goes to ToastRack

The EFT WiKi have a great list of Loot that you should hold on to for quests-purposes. Chech it out and get familiar with it... you could even print it out and put it on your wall so you have it handy at all times ;-)

What keys to keep

The Key Tool would be handy to obtain as soon as possible.

This section contains Console commands that i use.

You probably are use/used DLSS wrong when you enabled it the first time so go watch this video made by ChippaWubba --> Enhanced Tarkov with DLSS and DLDSR to learn how to fix your mistake ;-)

Modifications avilable at Loyalty level I

Sights above require a rail:

Guns you can buy as level 1 PMC

The information here is extracted from Gigabeef's video on the subject.

Rengavr made a video about EFT's 'built in' hip-fire cross-hair - watch it! it's goooood and explain the secret B-25U feature.

Use your stash areas inteligently... I suggest something like this:

You can vary the size of the three areas by moving the "virtual barrier" below the consumables- and above the long-term storage-area.

Just try to keep an area between the upper and the lower free so you can work there.

This is the approximate locations of EFT servers based on the name-column in the Launchers game server list.

This list is incomplete and translations are unconfirmed/not verified ;-)

This list is incomplete and translations are unconfirmed/not verified ;-)