I gave up on the "Hackingtosh" idea, and just installed Windows 10 on the build... sorry guys but my Mac mini is fulfilling my Mac OSx needs much easier than fiddeling with the Hackingtosh jungle.

Notes on this build

The Mobo is supporting M.2 drives, but the designer must have had a brainfart that day because the on-board controller is attached to a PCIe X2 port !! This is a severe bottleneck on the Samsung SM951 SSD M.2 2280 NVMe drive. At first i thought it was the SM951 that was the problem and that swapping it out to another M.2 drive that would work would be expensive o.O Luckily i figured out that the problem was the "internal" PCIe X2 port, and i found that i could buy the inexpensive ASUS Hyper M.2 X4 MINI controller to rescue the build :-P I misplaced my "before" picture from DiskMark but i can assure you that the SM951 was no faster that my "normal" Samsung SSD on SATA port :-D

The migration from onboard M.2 controller was painless. 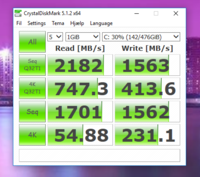